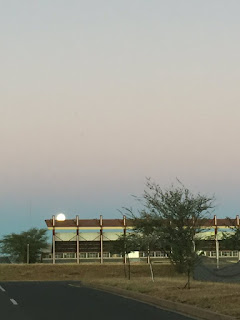 I sit here wondering but pondering really of what has become of the child. Bewildered as I reminisce of all the freedom and carefree spirited-ness that a child embodies. Have you ever just thought, I mean really honesty thought and analysed your thoughts of the boy/girl child you are?

I don't know, but there is something fragile about growing-up rich in fear, fear of failure, fear in success (whatever that even means!), fear in all things life. Somethings make no sense to me most times and I choose to ignore them. Why? you may ask! I see no reason why I should spend time wondering why I do not understand other peoples behavior at times, after all as a friend once put it "They don't care anyway". But back to my initial thought. There is something about the moonlight that simply takes me to a place of peace, a place where I could swear I was much younger and have no worries or none that I could care to worry about in that moment. As a child I was many things, but what I never was, was involved, in other peoples opinions of me that is. Then every so often technology catches up to me and I remember exactly where in time I am and more so, who I have become. Carefree in the moment, moonlight kissed as the pale dimmed light hits the dark ebony night darkness, crickets creek, a dog barks every so often, yet I ponderrr rrr. I wonder, does peace ever come to one once in a while, has life plateaued for most? Have I eaten lunch today? Then again the plethora of worries quickly rush the calm of night. Mmmaannn growing up aint easy, But, butttttttt; The journey is amazing.

Life is an Onyandi, I could swear it is, you grow up sheltered and nestled in the bust of your mothers kitchen ("hekupe okutya oye ngaa nyoko" - Oshikwanyama Proverb), well fed, protected but the camouflaged leafs until you ripen. As time passed by the umbilical cord that once held you on so tightly loosens or is it that the onyandi simply grows strong enough? idk the point is; it falls to the ground. The leafs that once sheltered you from predator birds et. al. wilting; green-olive-orange- brown- fallen! Under a false sense of bigness, know-it-all, self-riotousness and other me me me's you explore the world, only to have a goat eat you up, shit you out and now you are covered in Shit!!!! Home is the one place you wish to go back to. But, where is home in this Shit view to life you have? eventually the the rains come and in a storm you are caught, fertile soils engulf you, you feel a swell in your tummy and roots shortly begin to for, a beautiful shoot grows from your core, goats again! damn-it, shoot is gone again!. The second rains come and the shoot sprouts, leafs grow a lime green and the face of your father imprints on it, now you know! Then you remember all the talks given at the kitchen, and the process repeats;

"As time passed by the umbilical cord that once held you on so tightly loosens or is it that the                onyandi simply grows strong enough? idk the point is; it falls to the ground. The leafs that once        sheltered you from predator birds et. al. wilting; green-olive-orange- brown- fallen!"

The one thing we seem to neglect and see is that, leafs are part of a tree and just like we have roots, the tree from where this fruit fell still lives! The moonlight reminds me of that time, hehehehehe aahhh lekwata, oopps ovalumenhu ihaayolo eengandja!

I can stop being a Namib-desert horse now, roots await to be formed, and surely ...

Popular posts from this blog

July 10, 2013
Hi ya'll, So I am currently on holiday and wanting to keep busy, you know what they say about idle hands :) So I decided since WordPress  is being used by more and more organisations out there. Setting up the development environment: Ok so I thought it would be the easiest thing in the world I mean what could possibly go wrong with just clicking a few buttons WRONG!!! To my luck I found this awesomely cool website by the foxiest ladies in the Tech world called: ITCUTIES ,  Cuties they are indeed :P. I followed their advice on the video How to Install WordPress  on a Windows platform (I am running a Windows 8 pro edition Operating system) Below are the instructions and some of the errors I ran into: Download Wampserver  and install it (it comes with Apache, MySQL, PHP, PHPMyAdmin, SQLBuddy, XDebug):  Choose the directory in which you wish to install it Click finish and the server should be online (You will see it is either green or orange) On the Wampserver i
29 comments
Read more

Story time: How I learned of being more...

January 08, 2020
It is often funny when one wishes to write a story about their journey: a journey in most cases at the beginning. In this short write-up, I wish to share with you the concept of limited scope. This is about my transformation, how it came about and how chance changed my life forever. I remember clearly as day being grade 12 -high school- learners, with my friends discussing future plans of futures bright. Secretly, I did not know what I wanted after high school. See, I grew up in a system that says, go to school, go to varsity, get a job and be successful (whatever that means). At the time of being grade 12 learners, there was a new wave of thinking, leaning more towards doing what you love. The thing is, I am one of those people with many "loves". Long story short, my friends and I all wanted to become engineers, myself being great at chemistry, felt chemical engineering would best suit me. Plans were made, UNI’s applied to and final exams are written
11 comments
Read more

HCD vs UCD vs CCD

June 27, 2014
Hi ya'll, For some time now I have been contemplating where I should give my 2 cents on the Human Centered Design (HCD) vs User Centered Design (UCD) vs Customer Centered Design (CCD) debate. It is a tricky and sticky situation to be in when you are talking to someone and say; hey so do you guys do UCD? and this I feel it sometimes a trick question because if you say yes then there are other questions like: why not HCD or CCD? Well, to the best of my understanding HCD refers to putting the "human" in the center of your design decisions. This means not only the user but includes all the stakeholders that are involved in product design. It is prudent to state that user does not always mean it is a human being as some systems are designed as input for other systems and so forth. UCD on the other hand is something that has made the rounds and many still think that it is the holy grail. Well they are right as long as their project requirements dictate that i.e. I am doin
2 comments
Read more