So it has been a moment since my last post, although I did say that I would blog more often. I guess I fell off the wagon AGAIN. This time I will not promise anything but I shall try to keep my blog posts more frequent.

I was going through my hard-drive the other day and I saw some pictures from Leipzig, I mean that was such a long time ago I can barely believe it has been more than 2 years since I lived in Germany.

Below is a picture of me playing some Basketball in the Clara Zetkins Park with a group of really cool ballers from Leipzig. They have a Facebook group called Zocke im ClaraPark, they organise pick-up games every now and then, but if you go to the courts you will find someone there. what I did was just go jogging through the park and if I found somebody there then, then I played else I continued with a jog. 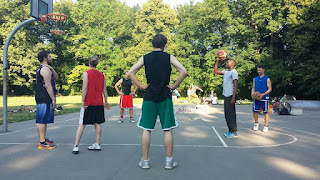 (Photo credit: I have no idea)

Pictures really do bring back some memories.

Popular posts from this blog

July 10, 2013
Hi ya'll, So I am currently on holiday and wanting to keep busy, you know what they say about idle hands :) So I decided since WordPress  is being used by more and more organisations out there. Setting up the development environment: Ok so I thought it would be the easiest thing in the world I mean what could possibly go wrong with just clicking a few buttons WRONG!!! To my luck I found this awesomely cool website by the foxiest ladies in the Tech world called: ITCUTIES ,  Cuties they are indeed :P. I followed their advice on the video How to Install WordPress  on a Windows platform (I am running a Windows 8 pro edition Operating system) Below are the instructions and some of the errors I ran into: Download Wampserver  and install it (it comes with Apache, MySQL, PHP, PHPMyAdmin, SQLBuddy, XDebug):  Choose the directory in which you wish to install it Click finish and the server should be online (You will see it is either green or orange) On the Wampserver i
29 comments
Read more

Story time: How I learned of being more...

January 08, 2020
It is often funny when one wishes to write a story about their journey: a journey in most cases at the beginning. In this short write-up, I wish to share with you the concept of limited scope. This is about my transformation, how it came about and how chance changed my life forever. I remember clearly as day being grade 12 -high school- learners, with my friends discussing future plans of futures bright. Secretly, I did not know what I wanted after high school. See, I grew up in a system that says, go to school, go to varsity, get a job and be successful (whatever that means). At the time of being grade 12 learners, there was a new wave of thinking, leaning more towards doing what you love. The thing is, I am one of those people with many "loves". Long story short, my friends and I all wanted to become engineers, myself being great at chemistry, felt chemical engineering would best suit me. Plans were made, UNI’s applied to and final exams are written
11 comments
Read more

HCD vs UCD vs CCD

June 27, 2014
Hi ya'll, For some time now I have been contemplating where I should give my 2 cents on the Human Centered Design (HCD) vs User Centered Design (UCD) vs Customer Centered Design (CCD) debate. It is a tricky and sticky situation to be in when you are talking to someone and say; hey so do you guys do UCD? and this I feel it sometimes a trick question because if you say yes then there are other questions like: why not HCD or CCD? Well, to the best of my understanding HCD refers to putting the "human" in the center of your design decisions. This means not only the user but includes all the stakeholders that are involved in product design. It is prudent to state that user does not always mean it is a human being as some systems are designed as input for other systems and so forth. UCD on the other hand is something that has made the rounds and many still think that it is the holy grail. Well they are right as long as their project requirements dictate that i.e. I am doin
2 comments
Read more